Work has steadily continued since our initial MVP release last year. The game and project as a whole is evolving.

Three weeks ago we quietly put out v0.5. We probably should have been more vocal about the several releases we’ve put out in the last year, but gameplay-wise not a lot has changed with each subsequent version. (Here’s a snapshot of some recent feature additions.)

While making great technological progress, we found ourselves a bit stuck with the MOBA format. It served us well as a tightly confined sandbox whilst making essential game features, but we’ve been having a hard time solidifying the minimum viable fun of the micro-MOBA we set out to make.

Recently this video came to our attention:

It makes many excellent points, and one in particular resonated very strongly with us: A competitive made-for-eSports lense imposes tight constraints on spectacle, i.e. overpowered or wacky units and abilities. But working with the weird stuff that leads to unexpected places is both a lot of fun as well as creatively productive.

Everyone in the Shotcaller team is a fan of the old Blizzard games. In this excellent GDC talk, some very timely lessons were imparted:

In short: Use the single-player mode as an unconstrained sandbox for all things fun and really out there. then pare that down to its essentials for the necessarily much more balanced multiplayer experience. For the next several development cycles, we’re re-imagining Shotcaller as a single-player game.

A single-player experience in the RTS/MOBA genre calls for a campaign. And every campaign needs a leading character with a compelling story.

Seeing as Shotcaller’s universe is historically inspired with a dash of magical realism on top, we quickly decided on Joan of Arc as a fitting protagonist. For the past two months we’ve been busy thinking up Joan’s visual aesthetic and the series of solo-play scenarios she’ll lead new Shotcaller players through. 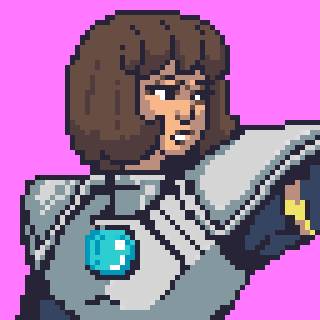 Our next release will feature the first part of our brand new ‘Shotcaller: Joan’ campaign.

As laid out in Everlasting Games, part of Spicy Lobster’s long term ambition is to build moddable game engines for specific game archetypes. One such highly influential archetype engine was Warcraft 3, a top-down RTS/RPG engine capable of making anything from a tower defense to a MOBA or even an online RPG.

Tiny bit by bit, we are re-making this type of top-down strategy-adventure engine as a utility framework layered on top of Godot, beginning in 2D pixels just like Warcraft 2 and many of its precedessors.

Shotcaller is our primary (but not only) means of shaping this framework because we follow the principle of ‘Write Games, Not Engines’. Other collaborators are helping us shape this framework with their own respective games (mods/expansions), inspired by the likes of Dark Deeds, Founding of Durotar, and even Warlords Battlecry.

The shared utility layer for all these games, called Crafty, will be licensed as MIT or similar, unlike the PolyForm NonCommercial license of the Shotcaller game. Expect a proper division to happen in the months to come.