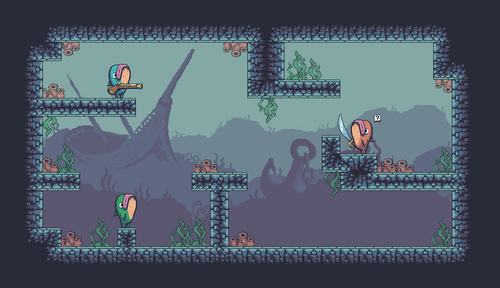 Today we released our very first pre-alpha trailer. Now that we're officially out of stealth mode, here's what you should know.

We are making an open source game (MIT/Apache repository going public in 1-2 months) which we will put on all major game/app stores with a price tag. By charging money for the game product we can pay passionate game developers to make it even better. We will share all parts of our game development suite as openly as humanely possible, i.e. so long as it doesn’t significantly impact our ability to keep developing the game in a sustainable manner.

Fish Fight is a love letter to its spiritual predecessor Duck Game. We are making this game because we have collectively spent thousands of hours playing and modding Duck Game, and we wanna keep the good times going. We intend to do that by continuing the game's beautifully simple essence, while adding lots of new goodness on top.

Fish Fight is an imitation. Any creative work is (see “Steal like an artist”), but we are not so much putting 1 and 2 together into the brand new 3, as we are just incrementing a v1.0 to a v1.1. We do aim to end up with something truly novel, but our path to that will be incremental. To make sure there's no ambiguity about our sincere intent to act only in good faith, we contacted Landon (the creator of Duck Game) at the very early stages of this project and got his blessing to move ahead with what we are doing.

Furthermore we're working closely with Duck Game modders to ensure we're aligned with the community. We're always on the lookout for more weapon hackers, level designers and pixel painters! Paid work is available to interns in the form of $100 micro-gigs. More on that later in a dedicated post.

We have high confidence in our ability to get this game to Done and published without external assistance. However, having already stated our intent to be open source, we may as well see if there's a publisher out there that isn't put off by our open approach, and might even see the same immense potential that we see in bringing open source practices to commercial game development and modding.

Aside from just wanting to keep a game archetype we love alive, we also want to demystify the game development industry. That is our larger, overarching mission as practitioners in our craft. We don’t buy into the need for excessive secrecy and proprietary ownership in order to make ambitious games. Therefore, we’re setting out to make one ambitious game after the other, out in plain sight.

This is an amazing idea, I’m fully behind it. I look forward to diving through the code later.

This sounds really exciting! Can’t wait to check out the source code and do some modding.